Freightliner came together recently to recognise and award their top achievers of 2017 in a glittering award ceremony in Melbourne. 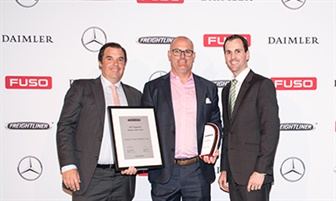 Freightliner’s 2017 Metropolitan Dealer of the Year winner was Daimler Trucks Perth and the award was presented to Dealer Principal, Sean Edwards.

The dealership was commended for its strong sales result and its concentrated customer focus throughout the entire business that was reflected in great customer satisfaction scores.

The 2017 Freightliner Regional Dealer of the Year was awarded to Daimler Trucks Sunshine Coast and presented to its Dealer Principal, Cameron O’Hara.

Daimler Truck and Bus also announced key awards for each brand that celebrate both the sales staff and the crucially important staff in service and parts sourcing.

Freightliner’s 2017 Service Manager of the Year was awarded to Kelly Henshaw of Trucks and Trailers Auckland after another year of consistent excellence building from him being awarded the honour for 2016.

Anthony Beggs of Daimler Trucks Newcastle was presented with Freightliner’s 2017 Rookie of the Year award.