Freightliner Joins Dunlop Series For Round 3

An extension of a new truck supply partnership for 2014 between Freightliner and Brad Jones Racing saw Andrew’s Jones Number 20 VEII Commodore sporting a new livery highlighting Freightliner’s 25th Anniversary in Australia heading into round 3 of the Dunlop Series at Perth’s Barbagallo Raceway. 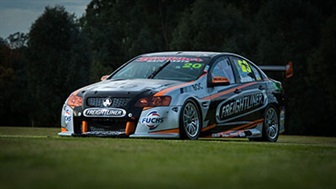 Team principal Kim Jones is pleased to welcome Freightliner to the Dunlop Series team. “It’s great to have such an iconic international company support our Dunlop Series team, as part of their 25th anniversary in Australia,” Jones said.

On the Saturday Qualifying for the Dunlop Development Series Jones finished the Qualifying session with the 13th fastest time from his 12 laps which set him off the 7th row of the grid. Day one Jones finished in 24th spot.

Final day of the race the team Freightliner Commodore worked hard overnight to fix some suspension problems imporving the car speed and handling for the 38 lap race. With a few chaotic opening laps Jones made it to 7th place by lap 21 and taking the chequered flag finishing sixth place.

Andrew Jones stated, “My pace in race two was awesome. The way we were able to move through the field showed the true potential of the Freightliner Commodore.”