Mick Grace knows he has one of the coolest jobs in the trucking world. He drives one of two Harley-Davidson Freightliner Coronado trucks, which crisscross the country hauling show trailers to various events. 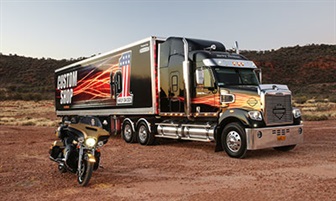 “People often tell me they would kill to get this job,” Mick says, before adding: “and they are not kidding.”

Big Rigs catches up with Mick in Alice Springs, the day after the Red Centre Nats muscle car festival, and the Freightliner 114 Coronado Harley-Davidson truck. It is one of two Harley-Davidson Coronados that turn up to events such as Harley-Davidson owner festivals, Summernats and bike shows.

This time, Mick has hauled the Custom Shop trailer up from Sydney, which is chock full of accessories that Harley-Davidson customers can add to their bikes, giving them a unique appearance.

The 114 Harley-Davidson Coronado has been optioned up too, with a big stainless Advanced Herd Texas-style FUPS (front under-run protection) bumper and so much chrome that the truck just might be visible from space. There are chrome wheel guards, chrome LED light surrounds, a chrome bug deflector and sun shield as well as a rear light bar made from, you guessed it, chrome.

On the inside, there are supple leather seats and a leather bunk wall that both feature orange diamond stitching and Harley-Davidson embroidery was also added to the back wall and headrests.

Other interior highlights include an in-cab fridge, wide mattress and old-school woodgrain on the dashboard and doors, as well as chrome instrument surrounds.

Big Rigs is tagging along for a Freightliner calendar photoshoot for the big Coronado and an extremely cool black and gold Harley-Davidson Ultra Limited motorcycle ridden by local Harley nut, Craig Cassidy.

On our way out to the location, Mick says that driving the big Freightliner is like “riding in the lap of luxury.”

“This truck is just so easy to drive and the leather seats really adds another level of comfort,” Mick says.

He works his way through the 18-speed Eaton manual gearbox as the 15-litre Detroit lumbers along, using only fraction of the 560hp of power and 1850lb-ft of torque that is available.

Mick explains how much he loves driving the special Harley-Davidson Freightliner and points out that he is often the centre of attention on the road.

“It looks so good that everyone wants to take a picture,” he says.

“The only problem is that they often do it while they are driving, so things can get a bit dicey.”

He says the truck also gets a heaps of interest when it stops.

“It’s such a great looking truck, with an iconic brand all over it, so it is bound to generate attention,” Mick says.

He says he often hears the same question: “People always ask me how I got the job and then they ask how they can get it.”

“I would run in and out of the back with a pig over my shoulder or half a cow, which was a good workout,” Mick says.

After copping an injury, Mick then moved into hauling metro freight around Sydney, which he still does today in between trips in the Freightliner Harley-Davidson.

Mick says the Harley-Davidson Freightliner driving gig came out of the blue.

“One day the boss asked if I wanted to go for a run up the coast that night and I said that would be fine,” Mick explains.

“Then I turned up at the yard and I saw this truck. I looked at him and he said “Yep, that’s what you are driving,” and I couldn’t believe it.”

Mick knows he is a lucky man to get in behind the wheel of the Harley-Davidson Freightliner and pampers it.

Watch Video Here
Back to News